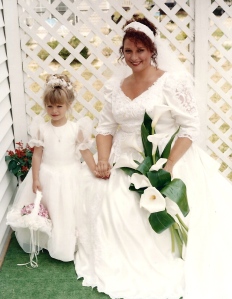 This blog began as an attempt to work on weight loss. Although I lost 50 pounds a few years ago, I ended up injuring myself, taking on an unhealthy obsession about losing weight, and eventually gained all the weight back.  The best outcome of that exercise was learning how to cook.

In my last post two months ago, feeling the pressure to conform to society’s disdain for the obese, I began once again on the path to restricting my food intake.  Over the summer I’ve discovered a blogger, Regan Chastain, who has greatly influenced my opinion on these tough issues. Regan is a fat activist and writes powerfully about the everyday prejudices faced by the obese population.  I was mostly drawn to her cogent and honest discussion about the myths that link obesity to disease and morbidity.

Thinking again about my wedding so many years ago, I’m reminded of my rail thin ex-mother-in-law who has suffered with debilitating health issues for as long as my son has known her too.   In the past 18 years, where she has cost the federal government and State of N.J. thousands and thousands and thousands of dollars in medical costs (medicare and state pensions), my physical health has been exceptional.  I simply have no physical health issues that warrant any concern at all.  With the exception of the injury caused by my severe weight loss program, I’ve had a cold here, a skin rash there, an achy elbow… that’s about it.  In the past few years, I didn’t even have health insurance because I literally never went to the doctor.

So, this blog is pivoting from today forward.  I’m going to write about the “Audacity of Enjoying Life While Fat.”  I’m mostly going to document what it’s like to be an obese person in a society so fixated on a premium of fitness, physical attractiveness, and conformity within a rigid standard for acceptable physical appearance.  I will leave the past posts as a reminder to people who stumble upon this blog, that I was once like you. Someone who felt ashamed of what they looked like.

One thought on “The Fatcinating Blog is Pivoting”