So, I joined the YMCA.

Our local YMCA is as good of a state-of-the-art gym as any I’ve experienced in large cities like Austin, TX or Orlando, FL. What’s even better is the price and the fact that I am not locked into a contract. Plus, my health insurance will reimburse me $20/mo if I visit just 12 times a month. Because of my (cough, cough) age, that means this amazing facility only costs me $29 a month.

There’s an upbeat vibe at this YMCA and it makes me feel good just to “be there.”

I’m starting out my exercise program slowly, but there’s tremendous room to grow at this facility, including private trainers. My schedule is fairly flexible now, so I can get the the gym when there aren’t a lot of people there.

The good news is I’ve gone beyond losing my pandemic weight, and I’m on the road to getting back on track. I’m down 32.4 lbs now.

The weight is coming off slowly now.  Every week, fractions of a pound. Sometimes, I gain a little, and that can be frustrating, even if it’s just fluctuating water weight (I’m measuring everything now).  But I’ve taken care not to fall into the trap I fell into before and to become obsessed with losing weight, to let it control me and let the manic desire to be thin and “normal” to take over my everyday life.

I want to adapt to a new way of living.  I read a great article in the New York Times a few months ago that explains what I’ve been doing more or less.  I have a new relationship with food.  I changed the way I eat.  This, more than anything else, has made the difference.

I’ve lost about 53 pounds now.  Yes, I still have a long way to go.  But the difficult part ahead will involve some more introspection, psychological commitment, and good old-fashioned, patience.

I’ve mentioned this before, but it bears repeating. The excess weight that I wrapped around myself served as a fortress that shielded me from male attention.  It rendered me invisible so that I could ward off any possibility of romantic entanglements by making myself as unattractive as possible.  It was safe in that space.

I could start working out more rigorously and attempt to lose weight more quickly at this juncture.  But this would not serve me well physically or mentally.  First, on the physical score, it would be punishing on my body.  I do not wish to punish myself.  I deserve to be fair and kind to myself at this stage of my life.  I don’t hate myself for being fat.  I don’t even hate that I gained so much weight and feel fairly certain that anyone else who endured the shitty circumstances that I did would have found themselves in a fat suit too.  Second, on the mental considerations, it’s kind of the same deal.  I don’t need to shame myself into faster weight loss.  This is where I got into trouble before and eventually gave up because it just wasn’t worth the effort. Additionally, I am not conjoining my self-worth with my body image.  Something very important, and I’d encourage anyone who’s going through a similar journey to view these two as distinctly separate.  It’s unfortunate that society isn’t as enlightened, but so be it.

My only regret about this slow path is that it will take a very long time to get to the weight I want to be to do the things I want to do, such as ride horses.  But as I was discussing with my brother over the weekend, because it’s just one day at a time, one step at a time on a long road, at the point of my arrival, I won’t have to change a thing.  I will be “there.”  I will have literally changed the way I eat, sleep, exercise, meditate, process stress, etc.  There will be no interest in going back to the way I used to live.  In an odd metaphorical way, it’s like I’m walking down a very large mountain path with a slight slope that extends for miles and miles.  It may take years before I get to my destination, but when I finally arrive, it’s almost as if I will be arriving as the young woman I used to be before all that crap happened at the top of the mountain.

So, no one has noticed I’m losing weight.  That is so sad.  I told my trainer today that if he lost 30 pounds, he would be dead.  More on him later.

I’ve also said, when I’ve tried to do this before, that when you’re my size or larger… it’s an extremely slow process to lose weight.  I’ve used the metaphor that it’s like “emptying a swimming pool with a tablespoon.”

Of course, I haven’t broadcasted this news on social media like I did the last time I tried to do this.  I realize it’s going to take over a year to re-learn a new way to live in the new (old) skin I want to inhabit.  The first person who notices I’m losing weight may prompt me to post more publicly about it. We’ll see.

But I’ll tell you who does notice: ME.  Everything feels better.  I feel stronger, lighter.  My clothes definitely fit better.  I’m much more confident.  I’m not exhausted the same way I was.  My energy level is up, and walking up a flight of stairs does not ruin my whole day.

Even more than the physical change is the mental transformation.  As I said before when I started writing here again, I just decided I don’t want to be fat anymore.  Maybe it’s due to all the wonderful talk therapy I’ve been doing, I’ve realized I’ve been carrying this “extra person” around with me for way too long.  My trainer told me today that fat on a woman is designed to protect her.  I told my therapist recently that where the fat has always been a shield of armor– ensuring I would keep men away, being unfuckable and all–  I’ve realized it’s also a cage.  It’s been keeping me contained in a controlled, angry world of my own making.  I may have been keeping myself safe, but living in hiding or camouflage has served to perpetuate my own victimization and repressed hostility.

Unlike so many women who were always overweight and always were rendered invisible or déclassé in society, I was not always overweight.  I was once a hot cheerleader and even hotter twenty-something in business.  (Oh, the stories I yearn to write…)  I was one of those women who’d turn heads when I walked into a room.  That kind of power goes unchecked in the universe.  It’s a heady thing.

So, as I’m gaining a lot of ground with my new business, I’ve realized I need every tool in my tool belt to be successful with my ambitious goals.  I know a woman’s looks are a weapon of mass destruction, and I intend to deploy what I have left of them strategically to reach my objectives.*

Pretty women have been doing this since the beginning of time.  Don’t hate.

On my trainer.  He’s such a nice, young man. Funny too!  It’s reminded me that I long for a man to touch me in a caring way.  (Don’t go there.)  I’m talking about the way he gently presses his knee between my shoulder blades and stretches my arms backwards.  He cares about what we are working on.  He is encouraging me to be my best self.

*I updated this post as a result of the prevailing #MeToo movement on social media.  Don’t conflate a woman’s focus on maintaining her image with anything sexual, especially as it relates to power grabs. 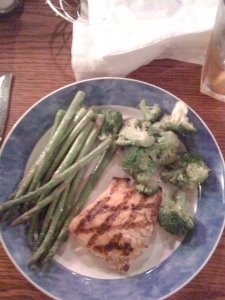 So far, so good. My daughter and I went out to dinner tonight at the local Red Lobster. I was able to order grilled salmon, asparagus, and broccoli. It was great! It’s really easy for me (so far) to continue with this diet. I’m enjoying cooking too.

I haven’t weighed myself for the past few days, but I intend to tomorrow. I also haven’t started working out, and I’m starting to feel badly about that. I just don’t want to face that gym humiliation. It’s different in the town where I live now because EVERYONE is fit. At my old gym, there were many people like me in the gym. I’m certain I won’t find that here. It’s an excuse though, nonetheless. I need to go.

I’ve let my gym membership languish. I forced myself to stop in today to look into getting my account straightened out. I had frozen my personal account because I wasn’t going, but because of a billing glitch, they terminated my daughter’s account. She’s not going to be happy to hear that. (My daughter has been in the Northeast all summer). She’s coming home on Monday.

The gym I used to attend when we lived up North had a womans-only area where I didn’t feel so self-conscious on the equipment. In addition, there were many all-size women who worked out at that gym, so I never felt too freakish. This new gym, however, gives me the self-conscious heebie jeebies. I feel like they should pay me to go there, as I’m a walking billboard for reasons why other members need to keep coming.

I don’t really like this gym. All I can really do at this weight is the treadmill. The treadmills are not as advanced as the one in my old gym. I used to listen to CNBC in the morning and several podcasts that I would synchronize to my ipod before I left in the morning. I’d like to switch gyms, but I’m not sure I can get out of my contract. In any event, I’m going to have to start going.

I’ve thought about walking around the neighborhood. It’s so unbearably hot here though.